I'm sure many people have visited the towns and villages where they grew up and lamented that where there now stands houses "this was once all fields and grassland!" However, the reverse is true in Hainault, Essex (bordering Chigwell and located near Ilford, Greater London).

After the second World War, there was a national shortage of housing for both returning soldiers and bombed out families from London and so in 1944 Winston Churchill announced the 'Temporary Housing programme'. The idea was to design houses that could be mass produced and prefabricated (made off site) with the aim of providing a large number of houses both quickly and economically in the factories that had once manufactured aircrafts for the war effort.

A prototype of a steel-framed prefab was displayed at the Tate Gallery London in May 1944 and the prefabricated design was a triumph. Production started in 1946 and by 1949 over 156,000 had be built. And these included those erected on the junction of Elmbridge Road and Forest Road in Hainault.

However, evidence of these houses, and even the roads they were constructed on, is totally absent from today's maps, the residents long since moved away or mainly re-housed in the more permanent municipal housing on the Hainault Estate. 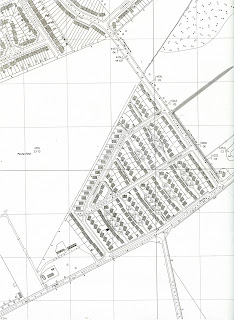 The prefabs located at the junction of Elmbridge Road and Forest Road will be further referenced as the "Elmbridge Prefabs", until further information as to what the actual name of this area was is received.

Walking down Elmbridge Road from The Lowe, where the main bus stops were located, the Elmbridge Prefabs were situated on the right hand side, opposite Fairlop Sports Ground. A row of prefabs faced out onto Elmbridge Road, starting from house number 100 - 110 (6 houses) before access to Finnemore Road, then a further seven houses (112 - 124) before access to Kennylands Road and finally eight more houses (126 - 140) before the corner of Forest Road. 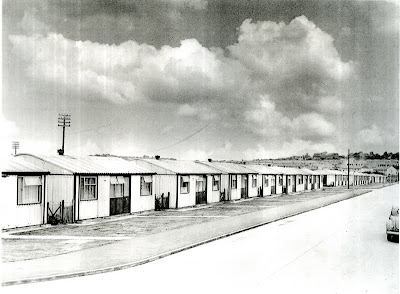 Kennylands Road (next turning on the right from Elmbridge Road after passing house numbers 112 - 124) lead right through the estate and out onto Forest Road.

The number of houses in Finnemore and Kennylands Road are listed in the table below:-

Spurring off from both these roads, were the numerous garden roads, that made up the bulk of the estate. Each of the roads housed a number of detached prefabricated houses and some of the roads were even punctuated with central green area with small trees and plants.

The number of houses in the garden roads are listed in the table below:- 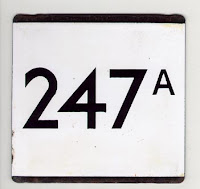 The reason why I started looking into the Elmbridge Prefabs was because my mum has fond memories of them. When she was 15 in 1957, she would take the 247a bus from Harold Hill to The Lowe and then walk down Elmbridge Road to visit her boyfriend who lived at 10 Burghley Gardens.

Now in her 60s, my mum revisited Hainault to reminisce and tried in vain to find Burghley Gardens. It could not be found on any maps and she spent a number of visits driving around looking for the area she remembered from her youth.

When she told me about the houses, I got the bit between my teeth and needed to find evidence of the street she remember so well. I found it strange that no mention of these prefabs was to be found on the internet and set out to find out more. And so I visited the Local History Archive section at Ilford Central Library, where I found old OS maps of the area from the 1960s that proved the estate existed!

My mum said that she remembers the house well, she used to enjoy visiting it as it had a pleasant garden to hang washing and both her boyfriend and his sister had their own bedrooms in what was obviously a three bedroomed property.


When Did They Go?

Without further investigation (which I intend to do!), it's hard to say when the Elmbridge Road prefabs actually went and the land was reverted to parkland. I found three maps at Ilford Central Library which proved helpful in my research.

The first a basic overview map from between 1948 and 1955, when the area is shown with roads and houses on them. A look at the electoral register from Feb 1956, lists each of the roads and houses with the names of registered voters.

The next set of maps were OS maps from around 1961-1963, which clearly detail each house and each road, these maps proved the most useful and it was amazing to see how the land itself and the surrounding has not changed much in the last 50 years.

The last map which has an indication of the roads that were, was one dated 1967, after the area became part of the London Borough of Redbridge. The map was a Redbridge boundary map that has the all the prefab roads drawn in and and arrow listing their names.

However, it is the understanding of the local history manager at Ilford Library that this map may just have been copied from an earlier map and may not indicate that the estate still existed in 1967. It could be feasible that the estate went just after it became part of the London Borough of Redbridge, so possibly around 1966.

Almost nothing exists today of the Elmbridge prefabs, certainly no evidence of the houses or the roads that made up the bulk of the estate. It seems, although I am still researching the history, building and demise of this area, that after the London Borough of Redbridge took control in 1965, the houses (or at least what still remained at that time) were demolished and the area was reverted to parkland.

However... one road does remain! Kennylands Road still exists today on some road maps (including Google Maps) but is merely a path through the now reverted parkland. However a walk down this road seems to indicate that this is more than a concrete path made through the park in later years. The road clearly has a kerb (usual for a park path) and there are typical residential drains at frequent intervals along the road but, probably most telling of all, is where the path no longer leads.

The modern day Kennylands Road turns slightly to the right and clearly tails off at what was once the junction of Finnemore Road.

To make this more clear, the image sequence below shows an aerial map of the area today; Elmbridge Road, Forest Road and Kennylands Road are clearly marked and when overlaid with the OS map from 1961-63, the location of this ghost town is made clear.

Did you live in one of the prefabs in the Elmbridge / Forest Road estate? Do you have memories or photographs from the time? We would love to hear from you!

If you have any information, please email me at karen.laverock@btconnect.com
© All Crown Copyright Rights Reserved
Created by Karen Laverock - May 2010
0 comments
Home
Subscribe to: Posts (Atom)